Just a week a half prior Krissy, Charlie and Olive were frolicking across the Alphabet City premises at approximately 12: 21 a.m.,  when Olive and about 3 shots of Jack Daniel’s screamed something like

What is Jules Jazz Bar, you say? A great question. I’m not so sure myself. However, at the time I attributed my spontaneous outburst to my extreme liking to their exterior decor that looked like this:

“THOSE LIGHTS! THEY’RE UNPARALLELED! WE HAVE TO – “

Charlie was already at the bar with a brew.

Before Olive could continue her monologue complimenting the wonderful choice of font,

The door was swinging.

Once they had complete their 8 step commute to the latter side of the bar, they noticed

To their right was Man

To their left was…his mom.

Indeed I made the obvious choice.

Her name was Rosemary. Recent divorcee looking for a charming barrio in Queens. She likes gardening, you see, and plans to make her celebratory “mean, green southwest lasagna machine” when her Polish daisies are in full bloom. And it really wasn’t until her venting session about Chester, their pet hamster, that I realized I had spent the last 33 minutes of my Saturday evening romancing a stranger’s mom…

“And then I said, SCREW HEALTHCARE! Oh hey, Olive!”

The moral of the story is this:

Turns out Man was a musician and Charlie had just so happened to charm the flannel off of him. They exchanged info and within a few days we found ourselves personally invited to his show just one short week later.

Charlie recruited the company of Harper and I to join her on her unplanned Tuesday night adventure. We were tickled to have such an exclusive invite to a “Facebook only event” and dressed to the fours in our most casual attire in attempts to defy the idea that any shits were given on our behalf. Playing it cool, you understand.

The bar was labeled….”Idle Hands” and according to the monstrous bouncer we needed to take about 2 flights

and hang a left.

Immediately upon our arrival we were greeted with a sea of plaids, dreads and bullrings.

Uncomfy in their new surroundings they attempted to do a casual look around for Music man and heard the following comments whispered/screamed by local hipster #1  along their way, followed ever so charmingly by their collaborative responses.

“I WILL CHOKE YOU WITH YOUR BUBBLE NECKLACE”

“I WILL BREAK YOUR FACE WITH YOUR OWN BRASS KNUCKLES”

“COOL SOCK BUN. IM GOING TO LIGHT IT ON FIRE!”

“I WILL DROWN YOU IN A MUCH NEEDED SHOWER”

After a making few new friends they shuffled >>> over to the bar to grab a brew or 3.

After retrieving our Popov vodka with a minor splash of tap water, they set off on a necessary journey to find the very music man they had come to appease.

“I SEE HIM HE’S OVER THERE I SEE HIM”

Olive decided to play the “crazed fan” route, requesting a picture to make his band feel a little more special.

As it turns out, twas the wrong band….Just a guy and 2 of his friends, actually. 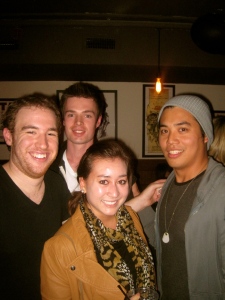 This was a mistake

However, I am ecstatic to report that upon hearing Music man’s performance, he was a smash hit at the live show.

And here’s how that was confirmed:

As Charlie, Harper and Olive were bopping along to Music man’s scandalous cover of a Phil Collins track, they noticed a girl (hipster #2) tearing up directly next to them.

She apparently goes by the name…Mammoth….

They asked her if she was okay.

She proceeded to break down and say “IT’S JUST THAT THIS SONG IS SO GREAT. SO SO GREAT. WHY CAN’T A GUY TREAT ME LIKE THAT AND SING THESE THINGS TO ME? ALL MEN HAVE BLACKENED HEARTS!”

And bOUnce they did. But not before they were stopped by a man in a track jacket who introduced himself as Jeff. He was in search for his friend Ian (who was later confirmed as Mammoths bf) and was wondering if they, per chance knew where he was?

“Well, I’ll just stay and chat for a while.” And chat he did.

As it turns our Jeff is in the music industry. Could manage bands if he wanted to, but would rather be on the talent scout side, you know? The band that’s playing right now? Ugh, their manager sucks. They’re goin nowhere, nowhere I tell ya, nowhere!

They were entranced by his professional ways and eager to snatch up his this legend’s business card on their way out. But upon reading it as they exited the building, they noticed the card only said this:

Who in the hell.

Alas, this lengthy episode came to a closing and  in the end I have considered investing in a few more plaid pieces, vintage Berets and indeed dialing the number on Jeff’s “business card”…thoughts?